How Many Shots Equal A Beer?

A round of entertaining shots will get the celebration started. If you drink beer, you have various packaging and size options. You can drink it straight from the can, bottle, or pint.

Both cans and bottles typically hold 12 ounces (354 ml), although a conventional American pint is 16 ounces (473 ml).

Keeping track of your drinking is always a good idea, regardless of the type of beverage you prefer. However, the number of drinks consumed is only one element influencing blood alcohol concentration and drunkenness.

Alcohol shots, it is widely believed, are stronger than beer and will make you drunk faster.

That isn’t always the case.

However, there is a technical distinction. It’s a game of bar trivia to test your friends’ knowledge.

Shooters are small mixed drinks with various liqueurs and nonalcoholic mixers, whereas shots are made entirely of alcoholic ingredients.

So, how many beers do you need to make a shot?

Continue reading to learn more about what we uncovered.

For our million-dollar questions! How many shots equal a beer?

A shot is a small drink with alcohol put into a shot glass. A glass of wine is also equal to a typical 1.5-ounce shot. A 1.5 oz shot is not quite the same volume you will get at all times.

If you drink beer, you have various packaging and size options. You can drink it straight from the can, bottle, or pint. Both the can and the bottle are usually 12 ounces in size and have as much alcohol as 1.5 oz of whiskey.

A pint of beer in America is 16 ounces.

There are several variations regardless of culture, manufacturer, or beer kind. It depends on where you are and how generous the barista is when filling your shot glass with liquid.

In the United States, a normal alcoholic shot measures 1.50 ounces. However, in some countries, the volume of shots is doubled…

…although it can be substantially lower in some countries than it is in the United States. Here’s an example of several shot variants.

Related article: How Many Beers In A Keg?

The alcohol in all alcoholic beverages is ethanol. Beer and hard drinks like vodka, tequila, and rum have different content.

However, on the other hand…

How much alcohol does your vodka have?

When comparing alcohol content, this reveals that one regular beer equals one shot.

But, keep in mind that the ABV of a drink can vary depending on the type and brand.

There are craft beers with ABVs of over 15% and light lagers with ABVs of 2 to 3%.  A drinking shot of the world’s strongest vodka contains 1.42 ounces of ethanol. That’s equal to 2.4 standard (alcoholic drink equivalent) beers!

A regular bottle of beer contains only 5% to 8% alcohol by volume. Each alcoholic beverage has a different amount of alcohol in it. The ABV of Sunset Rum and Devil Springs vodka is often between 40% and 60%. The ABV of one glass of wine is 12 percent.

The same amount of alcohol is in one shot of whiskey.

The usual drinking rule is to drink only as much as the body can process.

Check out the table below to guide you on knowing the Calorie content of your drinks.

A shot glass can hold a variety of drinks. This includes the most common beverages, such as vodka, rum, tequila, and gin. They can all be used as beer cocktail ingredients or consumed directly. The following are the most well-known shot cocktails:

Try this twist on the classic B-52 shot recipe if you want something that emphasizes the richness of Irish cream while still packing a punch.

Turn to the Bazooka Joe when you want a shot that tastes like bubble gum from your childhood. You’ll need Irish cream, blue curaçao, and a banana liqueur to make that characteristic, sweet flavor in your bar.

A boilermaker is difficult to resist. This classic consists of a shot of whiskey followed by a beer chaser. Some people want to pound it, while others prefer to sip it slowly.

Double the rum, and you’ll have twice the fun (or hangover). The big bang shooter is made using 151-proof and dark rums and triple sec and orange and pineapple juices. Make sure to share the recipe because it makes a lot of shots.

Due to its brilliant pink color, which comes from grenadine and Tequila Rose, the hot lips shot will give you some hot pink lips.

A shot of amaretto and Southern Comfort kicks off the gladiator. You may mix it with orange juice and 7UP in a pint glass or just shoot it and chase it with the fruity pint. In any case, it’s one of the more flavorful shots of its kind.

In the world of drinks, the name grasshopper comes to mind as a delightful blend of mint and chocolate. It’s a delicious little drink that’s ideal for any occasion. Particularly those with a green theme, such as St. Patrick’s Day.

In your glass, imitate the flavor of a Jelly Bean. Fans of black beans will enjoy this stacked shooter, which incorporates sambuca. This liqueur is wedged between Southern Comfort and either blackberry brandy or grenadine.

Simply stack grenadine, Kahlua, and Irish Cream in a glass to make this drink.

For more fun, you can also try…

Hold a game. Whoever can knot a cherry stem by only using their tongue the quickest right after taking a shot.

Amaretto, orange juice, sloe gin, and Southern Comfort combine to make the Alabama slammer. It’s a fan favorite for fans of the University of Alabama Crimson Tide, and there are various ways to prepare it.

The kamikaze has long been a popular shot, and it’s simple to make. Simply combine the vodka, orange liqueur, and lime juice in a shaker. It has a wonderful tart flavor that makes you pucker.

The biggest distinction between drinking beer and taking shots is the amount of time to consume them. Although they both contain the same amount of alcohol, a beer can be consumed for over an hour, while a shot takes only a few seconds.

If you’re at a party with buddies, you may find yourself taking one after another in a short period of time. As a result, you may become inebriated quickly.

The majority of young people assume that beer contains less alcohol than hard drinks. As a result, they lose track of how many units they consume. Unfortunately, this leads to unsafe conduct, such as drunk driving, resulting in serious injuries.

The average person’s body can break down 0.01 BAC (blood alcohol content) each hour. It’s around one drink every hour. If one beer equals one shot, one drink per hour will keep your blood alcohol level below the legal limit.

According to the American Addiction Center, binge drinking is like having five or more drinks. This is becoming more common among young people who drink alcohol to get drunk quickly and intensely.

Conclusion: How Many Beers Equal A Shot?

A basic rule of thumb is that one hard drink shot equals one 12-ounce (354 ml) beer with a 5% ABV. However, the ABV of both beer and strong alcohol can vary based on the type and brand.

Hopefully, this article has cleared things up for you!

A shot of vodka is the same as a bottle of beer. Each alcoholic drink has a different effect on our bodies. ABV of 40-60% is found in hard liquor.

The main result is that understanding your body’s ability to absorb alcohol should make you more conscious of your consumption. If you must consume as many beers as possible, a half pint or more, take it gently. The same is true if you drink one glass of pure alcohol. 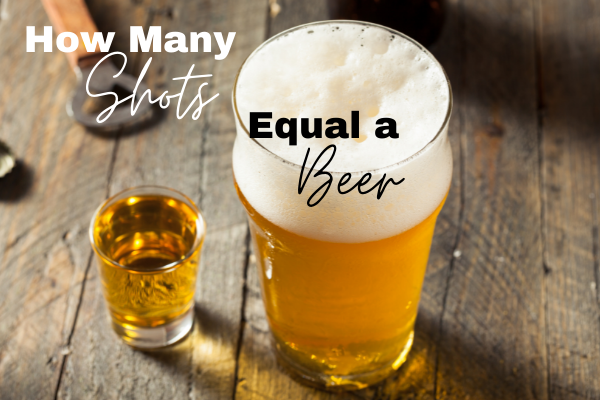